The unspoken dream was still ravishing inside to fulfill but did not get chance to experience the same. I got busy in following the cookies to compete for some time.

Then after entrance written, unfilled results and few interviews, i tried hard for top PG colleges but all went in vain (my roomy relocated to pune and I had no plans to join some private institute as my strive was only for top ones), so I decided to join corporate world to add my experiences in life (although failures were also added in my list) rather than giving another hard try.

I started enjoying each and every moment, was learning new things, facing the challenges and tried adapting different culture (with different people).
Everything was a routine for many days before I met with another corporate and this time humorous guyJ.

He was all time speaker and we, his team mates became all time good listener (for his funny philosophy). Lately, I got to know that he was one of the real bikers who fell in love with his bike and loved to click the snapshots of his love (he always disturbed me to capture nice shots in different angles).

My sleeping dream was already living in my open eyes and one day when he asked me to join him for a ‘funky walk in a bike’ (yeah as he was funny so he asked in the same way-“lets go chick for a funky walk on a bike”)
Without taking his much time, all set for speedy experience this time.
broommm…….. broommm………

He was fast but careful, funny in his talks but respecting girls (while in a ride), fearless but maintaining distance, passionate but only for bike rides!

We had the awesome food at road side dhaba with his all time humorous talks.
I was enjoying that ride in an open area and also capturing every walking road shots.

Thereafter, on the way of returning back, we were politely waiting for a red light to be green (strange, he was following all traffic rules too)…I did not know what was happened? After few seconds when he pushed back two kicks, in a very next second I had lay down on the road and he was in pain badly. He held his right hand on his left and rush to picked me up but he failed as he had the unbearable pain in his right arm and left leg.
Luckily, I was safe (just some wounds) but he was not in good condition. I called my close friends; we left the bike there and rushed to the nearby hospital. After X-Rays, we got to know that his right arm elbow was completely damaged and crushed into pieces.

I called his cousin who shared his apartment (as doctors suggested for early Operation), to drop him at his home (not far than 50 kms), so he could have his family support and family doctor’s suggestion.

That was one of an awful incidence I had ever faced………..! L

I went his home after a month (he was not in good health but recovering) and my eyes were almost wet because I had never seen long plated hand, nuts & bolts inside to heal up newly built elbow and a plaster in his left knee side. L

Fortunately, he joined back office after a gap of almost 6 months. He was back with same funny jokes, fit and fine to use his right hand (thanks to his physiotherapy doctors for such early recovery) but facing pain in picking up heavy things.

Now, what I have missed to explain here that what  has happened in that accident?
He had bear the pain to save a little kid who was in a bicycle and took an unplanned turn in front of our bike. Naturally, he had lost balance, his bike changed the direction, we ended up falling on the road and his right hand elbow collated to a road side big stone. Moreover, he was also holding his bike in his left leg, the reason of knee-fracture possibly!.................:(

This is how i experienced the trot and fast ride, met with wonderful real bikers and an accident!

It was just another incidence for me to say -”Bikers - The Real Hero”. 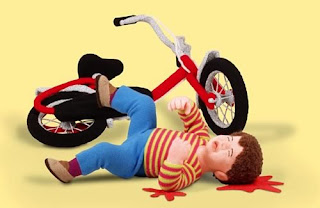 My dream of a ride was then dead inside;

A long drive in a speedy bike,
Dream of a ride,
Adventure of road- side…....
I’d a talk with air,
To blow and care,
Lovely was the feel,
Wounds with a knee heal…...
Heroes can be any,
For me bikers are,
Helper and a saver,
Real hero I do like …....
A long ride in a speedy bike!
Yeah! it was a ride not a drive !

Email ThisBlogThis!Share to TwitterShare to FacebookShare to Pinterest
Labels: BIKERS