Do you remember the time when we did pay the cost even for incoming calls and also remember those bulky handsets? I know, even a thought of that black Nokia dumb handset will definitely give you a loud laugh when you compare with a slick and chick today’s Smartphone. Gone are the days, when people have to think twice before holding a Smartphone now. Telecom industries have changed phases rapidly not only for profit but with a mission to see handset on everyone’s hand. Now days, it does not surprise me when I see a Chinese Smartphone in those hands who barely can feed their appetite.

--- Using a touch screen is like  drug addiction if you start using it once, you can barely leave it behind.

If you have a cell phone but no handsome call or tariff offers then what is the use of keeping jaunty handsets in the pocket? Absolute wastage, isn’t? There so, Service operators are competing in providing best services to mobile users since first generation. 2G offered GSM era, 2.5G came for GPRS and now 3G and 4G is on air in providing high speed services even if you are miles away you can still do video calling but the condition is your handset should be compatible.

So, How does it feel when you are sitting miles away from your loved ones and still you can  see them and manage talk via instant messengers over the phone. This is I call boom boom boomer situation when you are buying smartphone; you need a cross platform so that you can see each other, share , walk and talk all together. 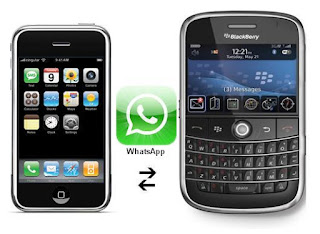 Whatsapp or BBM?
The platform for instant messaging was first launched by Blackberry called BBM (Blackberry Messenger) which has given strong effect in the market for blackberry users.

How can competitors sit quite to chase the pace in instant messaging?

Brian and Tyler, who had launch whatsapp as an advance version of BBM for all iPhone, Android or windows Phone, Nokia Symbion60 S40 phones and even blackberry users can also use it.

I am an android user; whatsapp supports my phone’s operating system. Most of the
users like me would prefer whatsapp to be installing on their phones. So, obviously it
is winning over BBM rapidly because android users are increasing. I would like to
show some differences thats why I  am preferring whatsapp over BBM.

Fellow blogger, Bhavnoor author of 'Between the lines' compared both as "battle of sexes" Strange, isn't? Do read his full story for this battle, he explained about cost and features  explicitly.

Guys, do share your views as i am new to this application and would love to know more about it!

Link to install this application via system: https://play.google.com/store/search?q=whatsapp&c=apps