The wonderland of culture and greenery - Jhajjar (A city of Jats)

It is still very early to state that “Jhajjar” is one of my favorite city of India but my recent visit to Haryana villages i can connect and say that I would love to go again to know more about their culture and to showcase the exuberant crowd across India. Being in NCR from past 11 years I can concatenate and would not take even a second to say how much i love “Saadi dilli” but for now i would like to scribble about a place where i recently visited and got amazed by their culture.


Honestly, i felt discontiguous and concerned for the city “Jhajjar” , a place 65 kms far from Delhi where i had been almost a month back. The place where still humanity lives no matter what language they speak. My perception has been completely changed about Jats no matter what tone they speak and how abusive they can be. I have been to other famous cities of Haryana like Panipat, Sonipat, Karnal, Gurgaon, Kurukshetra, Hisar, Ambala etc. but I am sure there are pretty less who would like to write about small district of Haryana, “Jhajjar”. This place has got popularity and get familiar among many from the recent movie Tanu weds Manu returns where Kangana (Bollywood actress) has played the role of full Haryanvi girl (recalling "Banwri" song)

What drives me within is the greenery of the place and their way of living even when local politicians (Khap Panchayat) forced common people to live in restlessness.

Nov18, 2015
It was all of sudden plan to visit PratapGarh, Farmhouse Jhajjar with a group of friends. It was office holiday due to GuruNanak Dev Jayanti. My morning started with Gurudware darshan and then we all moved to the place PratapGarh, Jhajjar.

We all know about Khap panchayat rules and undigested women boundations. This state is been dominating from several years now and how strict they are for women society, pitiable sometimes. They are against and not at all liberal for love marriages. Hence, my zeal was at its peak to meet especially haryanvi women to know their current values and culture.

Haryana Khap is not an official government but a group created by Haryana localised and Jats and this is a community organization unaffiliated with the formally elected government bodies.

Apart from all their politically loaded issues i was equally excited to wear their attire, to relish food which is so famous like bajre ki roti, sarso ka saag, puri bhaat etc. and to interact with more localised.

Greenery around the place gave me glimpse of their hard work.

I felt like i had then landed somewhere in Punjab fields.
The moment we landed people were so humble to welcome us by applying lal (red) tikka. 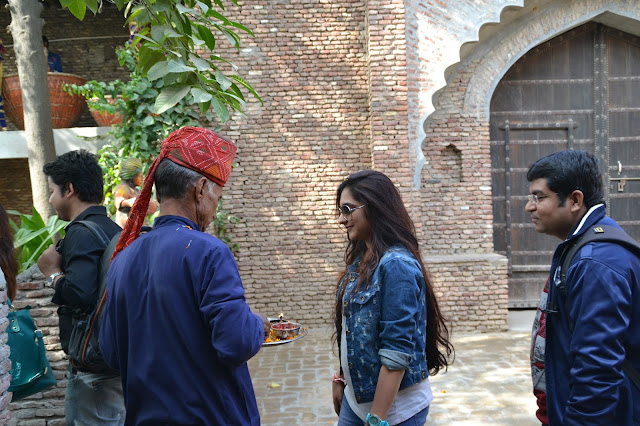 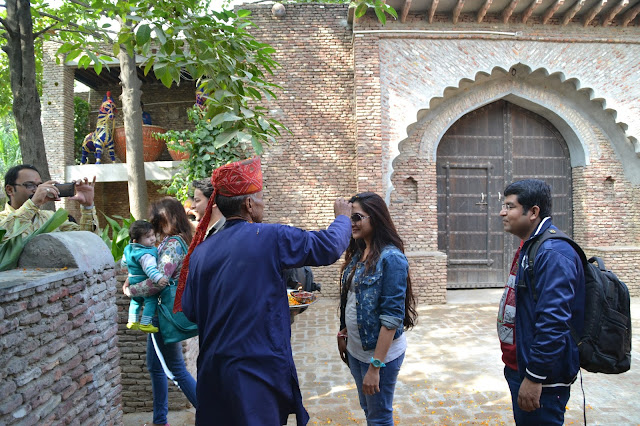 Their gesture was so graceful and i was all excited to have a chit chat with local people in Haryanvi though i am not fluent but i love speaking different languages and copy their accent. I tried with haryanvi language. Believe it or not i actually could speak impeccably.
"Chori ghani haryanvi bol rai se" -  This is what a man said when i had spoken with him in his tone.

The whole lawn was full of nature, chirping of birds, smoke of hookas, 2-3 aligned khatiya (Khaats) where all villagers were in their gap-shaps and  were holding big glass of milk or lassi.

Ever since i had have heard the song - Mein hui banwri (TanuwedsManuReturns) and had a glimpse of her haryanvi wedding dress in the movie i wished from the day to atleast once tried to be like and danced like her. By looking on their attires i found they have some mix shades of several other states like Rajasthani, Punjab or HP and so on.The villagers i found little less literate and they were malleable from our visit and chit-chats. But, seriously they were much humble that any of my friend was

Food to relish
Oh My Gosh, how fabulous food they made and quite Punjabi i found, full of butter and Ghee. Green dhaniye ki chatni was actually dark pitted and i was so engaged in gluttony of their stupendous food.
Really, for a moment i whispered to myslef Why the hell these women can not showcase their talent to the outer world? Are they really allowed to be what they want?

Some more captures of Hayrana - A city MadeOfGreat