A letter in revert to #ABletter


The letter you have recently posted has touched many hearts including me. I am feeling it to the core and I went off to the depth for a moment while reading this, possibly because I have never received any kind of such rhetoric letter. You are someone I admire, respect and adore and whenever I read something that comes from you, it makes me speechless. You belong to a family of legacy and so do your grandkids. I do not have legacy like your granddaughters have but still this time I thought of to write something to represent as someone’s granddaughter. You dedicated that letter to every girl and woman who can bring change in the society. So, being a woman who understands the power of words, could not resist in spilling her emotions in words though.

I love my nation and living miles away from the country since a little time. Honestly, being a girl I could not change much rather than ignoring so many “Ws” (What, When, Where, Why…) does not really matter where I lived and living now. I started doing things of my choices exactly like you delineated. Moreover, I did try to change many things but what I ended up in changing is “only myself”. It was not the question of changing people and their perceptions, it is all about if they really want to be changed.

I, now, live in the most developed country of the world where character is not getting traced by the size of what women wears, no restrictions, no boundaries, not so many Ws yet I wear what suits on me best and in which I am more comfortable. I love my culture and feels proud from where I belong. The crux of my point is many like me who are residing outside the country represent India and really do not want it to be called a man dominating nation. It would have been great if you could have mentioned “great grandparents” instead of quoting “great grandfather” in your letter.

Changes are not going to come if one would not change the mindset. A Woman feels dignified when she adds her husband’s name after maiden name but it does not mean she wants to be disregarded for what she is. My words are not in defiance of what you have expressed and there is no harsh feelings yet I got emerged in some strange thoughts you probably would not have had imagined while writing this letter. Your letter was emblematizing to all females and especially your grown-up granddaughters and I apologize for this question that Why do you forgot to depicture women of your dynasty without whom probably no one in the family would have existed? Perhaps, answer is known and I think, nothing else has to change first in India more than it is still considered to be a “Man dominating Nation” which is why women are stagnant to be treated the same even when fully dressed.

Below are the images of #ABletter 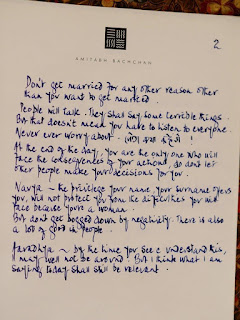 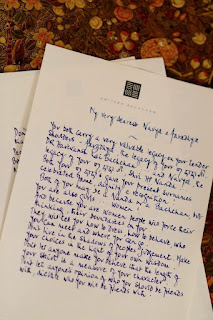 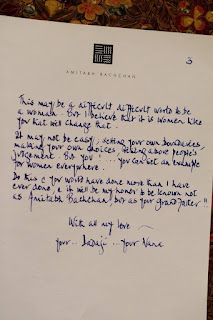 Email ThisBlogThis!Share to TwitterShare to FacebookShare to Pinterest
Labels: Article